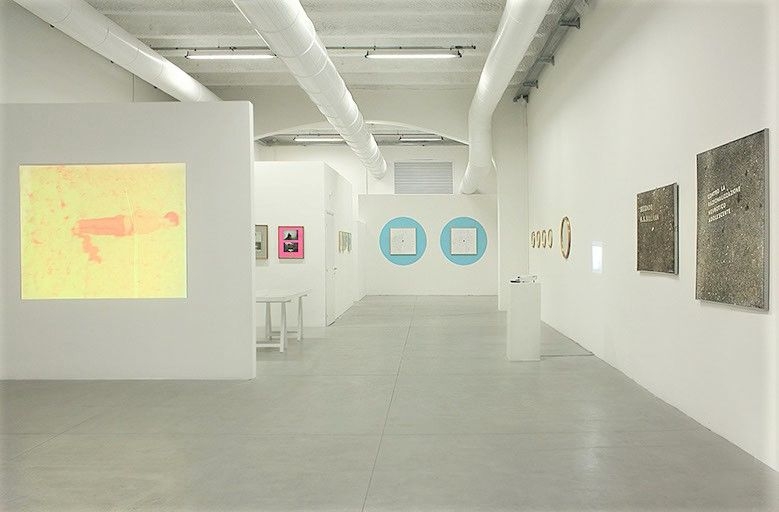 After more then thirty years, Luca Maria Patella, returned to Milan with a wide exhibition dedicated to the visual word and writing along the entire course of his activity, from the '60s until today. The exhibition autoEncyclopédie by Luca Maria Patella aims at being a sort of anthology of Patella's work, seen at this phase through writing.

The Laura Bulian Gallery is pleased to announce the inauguration of selfEncyclopedia by Luca Maria Patella, a solo exhibition which marks his return to Milan after an absence of thirty years. It is an ideal follow up on one of our previous group shows The Fourth Prose (2015); Patella's exhibition deals with the visual word and writing throughout his artistic development, from the sixties to today. The title itself selfEncyclopedia can be read as the opening chapter to what might be considered a reconnaissance, a progressive time-line of the work of one of the most interesting and elusive masters of Italian conceptual art.
Though Luca Maria Patella may be considered a champion of interdisciplinarity, a tireless experimenter in artistic languages and an artist who is difficult to classify, within his multi-faceted work preference has been given to innovative and open-minded exploits into film and photography, genres in which the artist has been rightly recognized as a precursor of many later and present-day trends. Furthermore, it is true that films such as Terra Animata (Animated Earth 1965-67) or SKMP2 (1968), and likewise his “projected environments”, are now considered cornerstones of multimedia research as well as important artistic advancements. And yet, verbal language (whether oral or written) is surely the raw, plastic material of Patella's entire activity, though his research is equidistant from either analytical-structural type tautologies or the cut up of contemporary visual poetry.

Word and sign enter Luca Maria Patella's different layouts (graphics, photography, film and performance), proliferating and disseminating both inside and outside formats, as puns and word plays; magical territories that crumble and reform incessantly, that disintegrate and recompose at different speeds, according to different states of focus. Each word breaks up into a multiplicity of syllables that shatter the semantic plane and recompose at a phonetic level or vice-versa. But they can also multiply or else overturn when reflected in mirrors, they contract into ideographic schemes or else spill over and circulate from one medium to another. The usual codes of interpretation and models of communication turn out to be inadequate or compromised, likewise for points of perception and the subject's behaviour.

By resorting to psychoanalysis (from Jung to Lacan) and Duchamp's Infra-slim, what Patella intends to undermine are the structures of location and identification that we use to capture the world, things and ourselves. The aim of dismounting these structures is to open that which is possible, favouring matter which is always mobile, a flux which is never fixed in stereotypes or conventions but is rather ongoing, becoming. For this reason, apart from the films, the photographic canvases and installations, there is an intense output in print which now numbers over sixty monographic publications on different subjects and formats starting from the first explosive artist's book entitled I am here dated 1975 and including all the issues of his Official or Unofficial Journal.

The title of the exhibition refers both to the primary role played by words in Patella's work and his ironic claim to establish another complete cognitive system, spanning the whole range of knowledge, from art to science, starting out from his own psychoanalytic self-analysis. Thus selfEncyclopedia aims at being a sort of anthology of Patella's work, seen at this phase through writing. It is, moreover, a homage to another one of his mentors, the proto-psychoanalyst Denis Diderot, to whom he devoted a volume in 1984 entitled Jacques Le Fataliste come Autoencyclopédie, which will be reprinted for this Milanese exhibition by Archive Books and Laura Bulian Editions.
“I belong to no one – wrote Diderot – and I belong to all: you were here before you entered and you will be here after you leave”. And for Patella, this is just the subconscious.

Opening times: from Monday to Friday, from 3 pm to 7 pm. Free entrance