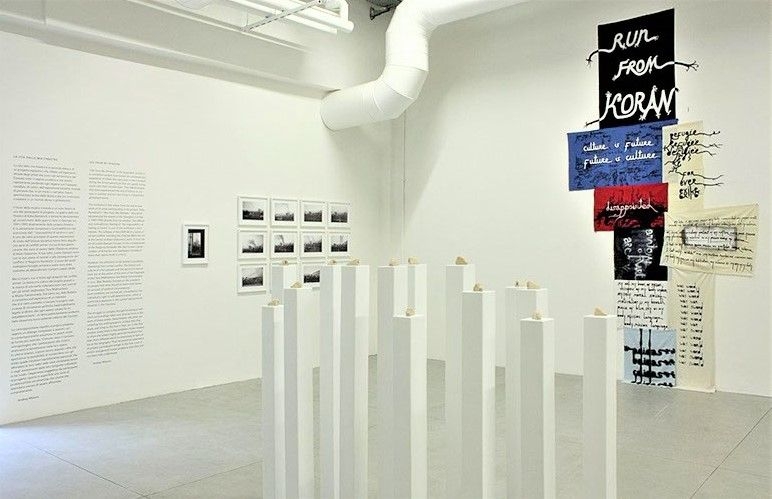 The Laura Bulian Gallery is pleased to announce the exhibition Life from my window, curated by Andrey Misiano, that studies the contemporary experience of artists who were born in the Caucasus during the Soviet period yet that are rapidly losing touch with their socialist past.

The Laura Bulian Gallery is pleased to announce the exhibition Life from my window, curated by Andrey Misiano, that studies the contemporary experience of artists who were born in the Caucasus during the Soviet period yet that are rapidly losing touch with their socialist past.

First and foremost, all the artists participating in the exhibition – Babi Badalov (Lerik, Azerbaidjan, 1959), LusineDjanyan (Ganja, Azerbaijan, 1981), Aslan Gaisumov (Grozny, Russia, 1991), Musay Gaivoronskiy (Dagestan, Russia, 1987), Taus Makhacheva (Moscow, Russia, 1983), Koka Ramishvili (Tblisi, Georgia, 1959) have in common a painful search for their place in the world in the conflictual conditions of the new world order. They depict people that have experienced the end of history in one way or another and are now living in a disjointed globalized world.

At the same time, they retain recollections of Soviet life and the first post-Soviet decades that are currently seen in an extremely contradictory historical perspective. On the one hand, the practice of analyzing, reconsidering and debunking the Soviet project is rapidly spreading in the academic and artistic communities. On the other, at the political level, the regimes that have arisen on post-Soviet territories are selectively speculating on recollections of positive aspects of socialist life in order to patch holes in their profane ideological programs. To sum up, although it is difficult to say in what form the Soviet past is returning today, it is clear that the great expectations of the period continue to exist in the future conditional tense.

The exhibition’s title stems from the well-known work of an artist participating in the project: Koka Ramishvili’s War from My Window. Ramishvili documented the events of the Georgian Civil War in 1991-1993 directly from his window. The difficult and contradictory feeling of “the impossibility of feeling at home” is one of the exhibition’s main themes. The collapse of the USSR led to a series of armed conflicts, including two Chechen Wars that are at the center of Aslan Gaisumov’s work. In turn, the art of Lusine Djanyan focuses on the consequences of the Nagorny Karabakh War that forced a great number of Armenian and Azerbaijani families to leave their native lands in a hurry.

However, the exhibition is not limited to problems stemming from armed conflict. The history and culture of one’s people and the search for eternal truth are at the center of the work of the Dagestani artists Taus Makhacheva and Musay Gaivoronskiy. In turn, Babi Badalov focuses on the problems of people that were forced to leave their homes on account of political circumstances. Such problems are intrinsically connected to the individual’s right to self-determination, which is particularly apparent in the current sociocultural situation in the Caucasus.

The struggle or complex thoughtful dialogue with one’s surroundings takes very diverse forms in the work of these artists. Nevertheless, the latter are united by the anthropocentric context that they study and bring to the fore in their art. In the final analysis, every work in this exhibition invites viewers to share the artist’s highly personal intuitions that stem from different social circumstances or facts of his or her biography. Thus the personal experience of project participants brings to the fore a set of artistic and general human problems that have still not been fully understood.

Babi Badalov was born in 1959 in Lerik, Azerbaïdjan. He lives and works in Paris, France.

2014 Report on the Construction of a Spaceship Module, New York, USA.

2011 The Journey to the East, Krakow, Poland; Vestfossen, Norway.

Lusine Djanyan was born in 1981 in the city of Kirovabad (now the city of Ganja), Azerbaijan. She lives and works in Russia. She was member of the Pussy Riot group with whom she conducted art actions and performances.

Aslan Gaisumov was born in 1991 in Grozny, Russia. He lives and works in Grozny. He graduated from the Institute of Contemporary Art, Moscow in 2012.

2012  I Am Who I Am, Kunst im Tunnel, Dusseldorf, Germany;  3rd Moscow International Biennale for Young Art, Moscow, Russia.

Taus Makhacheva was born in 1983, in Moscow, Russia. She lives and works in Makhachkala, Russia.

Koka Ramishvili was born in 1956, in Tbilisi, Georgia. He lives and works in Geneva, Switzerland.

2011 Back to the future, Mitterand+Sanz, Zurich, Switzerland; To see The Dimensions, Konsthalle, Lund, Sweden – solo show

Life from my window