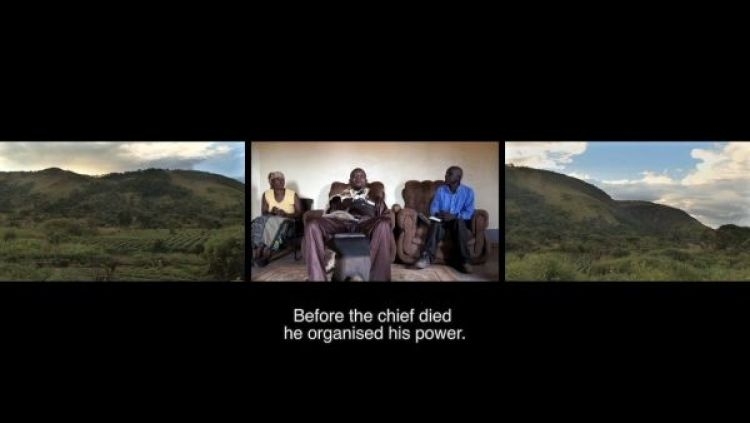 On the occasion of the exhibition The White Hunter on Monday, May 29, FM Centro per l'Arte Contemporanea presents CONTESTED TERRAINS. Projection of Pungulume video by Sammy Baloji and Filip De Boeck.
After the projection there will be a conversation between Sammy Baloji, Gabriele Salmi and Silvia Riva.
Before the CONTESTED TERRAINS it will be possible to visit the exhibition The White Hunter.

The screening will take place on Monday, May 29th at 6.30 pm
at FM Centro per l'Arte Contemporanea - Via Piranesi 10, Milan

On the occasion of the exhibition The White Hunter. African memories and representations, curated by Marco Scotini, FM Centro per l'Arte Contemporanea presents CONTESTED TERRAINS. Projection of the video  Pungulume (2016) by Sammy Baloji and Filip De Boeck (30 min).

The event is organized in collaboration with The University of Milan and follows the seminar Congo Far West? The mobility of archives and the notion of heritage in Africa on Monday, May 29, at 10 am at the Department of Foreign Languages ​​and Literature (Piazza Sant'Alessandro 1, Milan).

The screening of the video will be followed by a conversation between Sammy Baloji, artist, Gabriele Salmi, organizer of the Lubumbashi Biennial, ALBA Onlus, Picha Center D'Art, Galerie d'Art contemporain "Hangar", RD and Silvia Riva, Department of Foreign Languages ​​and Literature, The University of Studies in Milan.

The conversation will concern the theme of creative imagery that rethink, resume and reconstruct the archives of African colonial memory and question the present notion of heritage.

Pungulume (installation)
Color video, 16: 9, in Sanga language with English subtitles. Belgium, 2016, 29 '
The city of Fungurume (Pungulume in Congolese ) is located in the province of Katanga (Democratic Republic of the Congo) and the hills and mountains surrounding it form one of the largest deposits of copper and cobalt. During the pre-colonial period, the area was already one of the main trading centers for copper in Central Africa. Today the mountains are owned by the American Tenke Fungurume Mining consortium (TFM). Since 2009, the mining activity of TFM is in full swing and has caused the relocation of thousands of Sanga native. Pungulume has its fulcrum in the head Sanga Mpala and in its elderly court who orally transmit the story of the Sanga people, against the scenario of the industrial destruction of the landscape still remembering Sanga's memory and identity. (Filip De Boeck)
Pungulume was created in the context of Suturing the City, a project by Filip De Boeck and Sammy Baloji, and is available in two versions: an installation composed of 3 images and one video.

Sammy Baloji was born in 1978 in Lubumbashi, in the province of Katanga of the Democratic Republic of the Congo. With a borrowed camera, he began taking pictures that he used as a source for his cartoons. He studied photography and video at the Ecole Supérieure des Arts Décoratifs in Strasbourg, France. Grown up in Lubumbashi, he has known the decline of the Congolese mining region, following the exploitation of the colonial period, and the ongoing resumption of mining activities by Chinese companies. The artist overwrites historical photographic realities and draws on colonial archives, combining past and present, everyday life and representation. Explore architecture and the human body as traces of social history, memory locations, witnesses of power operations. The main museums have dedicated personal exhibitions to him: Musée du quai Branly, Paris; MuZee, Oostende, Belgium; Royal Museum for Central Africa, Tervuren, Belgium; Museum for African Art, New York; Contemporary Art Center in Brussels (Sammy Baloji & Filip De Boeck - Urban Now in City Life in Congo). He was nominated for Prix Pictet as finalist in 2009 and got the Prince Claus Award in 2008. Sammy Baloji was awarded the honor of the Knight of the Order of Arts and Letters of France. He won the Internationale de la Francophonie (OIF) prize during the last 2016 Dakar biennial for his work at the Ouakam Popular Park.

Before the CONTESTED TERRAINS it will be possible to visit the exhibition The White Hunter.

Monday, May 29 2017
from 6.30 pm
at FM Centro per l’Arte Contemporanea
Via Piranesi 10, Milano
Sala Carroponte